What are the Best Budget RGB Fans? Today I’ll be exploring some of my favorite RGB case fans that won’t break the bank!

When it comes to the best RGB fans, I already have a full comparison written. However, they can get a bit pricey, especially when you are buying several fans.

I thought, why not come up with a list of the most affordable case fans? There are a lot of young gamers and PC builders that are ballin’ on a budget. And, this list are fans that I would have purchased when I was in high school. 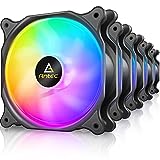 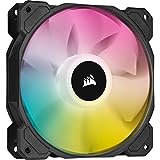 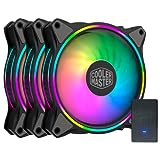 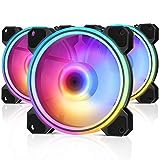 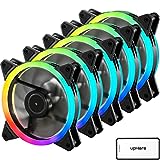 RGB computer case fans have improved dramatically over the past 2-3 years. In the early days of PC building, fans were just plain black, or if they had a light, it was a single color.

These case fans were, admittedly under performing, not very bright and did not possess the customizability that we expect in modern fans.

Building a custom gaming computer is becoming more and more common. With a custom PC comes the need for awesome RGB case fans. RGB fans can improve the look and style of your gaming PC while also improving performance and cooling.

While not everyone has a massive budget to build a gaming PC, everyone does need to be able to build it with style. It is for that reason that we decided to compile a list of the best cheap RGB fans for building a custom gaming rig.

The Asiahorse case fan is a very good looking case fan. The design of the fan blades makes for a unique look in an abundantly similar category. The fan wings have a “wicked” design that really stands out.

In addition, the LED design is a “halo” ring on the outer portion of the fan. It provides a bright, diffuse glow that gives a lot of character to your gaming computer. There are 24 individually addressable LEDs surrounding the fan allowing for complete lighting control and a variety of lighting modes.

They achieve this diffuse glow by using 24 LEDs that are placed very close to each other. This stops any gaps from forming between the LEDs making a very uniform and soft light. They do have rubber coated mounting points to reduce noise, vibration and sound isolation.

One downside is that the LED ring is only on one side of the fans. This means that which way the fans are mounted matters. But, if you mount the case fans correctly, you should see the LED ring in most cases.

The features of the Asiahorse 120mm RGB fans are plentiful. They feature 24 addressable LEDs that can each be individually programmed. There is a remote control included to control the individual R,G,B,W (red, green, blue, white) colors and color effects (streamer mode, breathing, multi-color cycling, solar eclipse, etc.).

The Asiahorse case fans also feature 2.4GB RF bandwidth for the included controller. This controller triples wireless transmission rates and decreased the response time to milliseconds. The frequency is also not affected by other remote controllers.

The included fan hub will support up to 10 fans and 2 LED strips. It is quite simple to set up and works as expected.

Finally, the Asiahorse fans have 5V ARGB. 5V ARGB is a header on motherboards that allows you to control Addressable RGB lighting on fans, LED strips or other RGB products. ARGB is compatible with many motherboard manufacturer’s and their software.

The Asiahorse Addressable LED 120mm fans have very good performance. They should cool any gaming rig or PC with no problem (despite being loud at times). My computer sits under my desk so I didn’t have really any issues with sound, but I could see them potentially getting loud for some users.

As far as RGB performance, they looked cool and gave my computer a unique look. The LED ring is one of my favorite design styles and accents a gaming computer really well.

I would recommend if you purchase these to keep them on the low or medium fan speed settings and whatever color option that suites your build. The low speed cooled my PC with no problem, even when gaming.

The 120mm GIM RGB case fans are another great option for improving your gaming computers look and performance. They provide even more RGB flavor compared to the Asiahorse fans but don’t have (in my opinion) as clean of an aesthetic.

They feature more traditionally styled fan blades with rubber padded mounting points. The blades are clear to allow for RGB lighting to shine through and give the GIM fans a more flashy appearance.

The LEDs point inwards to allow not just the fan blades to light up, but the outer rings as well. The GIMs will light up both sides of the fan, so no matter what orientation they are mounted, they will still show RGB light.

The RGB lighting on these fans is powered by 16 individually addressable LED chips. Each of the LEDs is able to be seen and gives off an interested “laser” effect.

Although the Asiahorse fans do provide more even, diffuse light, the GIMs will give some the desired flashy RGB effect for sure!

The GIM 120mm RGB fans boast several features that make them a strong competitor in our best value RGB fans. They include a remote controller that allows you to control all of the fans lighting individually. You can also adjust speed and lighting effects.

In addition, the GIMs have 16 RGB LEDs that can be individually controlled and will light up your gaming PC. These LEDs are powered by a 12V SATA connection directly from the power supply.

They also feature a hydraulic bearing system to help the fans spin quietly. This system lubricates the bearing with a friction-reducing substance and also helps to increase performance and longevity.

The fans come with all of the included hardware to install (screws, control hub) and were easy to install.

As soon as they were installed, they instantly started spinning. These GIM fans did a great job cooling my PC. They had no issues regardless which speed they were set to and did provide adequate air flow. Again, my PC is mounted underneath my desk, so sound isn’t a huge concern, but they quiet for RGB fans.

Personally, I had no issues when stressing my computer. I also attached the fans to my Corsair water-cooled radiator and performed surprisingly well!

If you are interested in purchasing the 120mm GIM RGB fans, I would recommend using them for aesthetic case fans and in locations where they will stand out. They definitely will do that job well!

The upHere RGB Series 120mm fans are an awesome “halo ring” style option that is used for custom gaming builds. These RGB fans are similar to the GIM fans except they have black fins with an LED RGB ring. The LEDs are individually controlled and chipped allowing for customization of lighting effects.

They have traditional fan blades that provide a modern aesthetic and allow for adequate air flow. The upHere fans also feature rubber mounting points to allow for maximum performance, vibration reduction and improved efficiency. Contributing to this is the hydraulic fluid bearing that allows reduced-friction fan spin.

The fans maximize a high-airflow design and are tuned for “large volume cooling”. The upHere RGB fans use a “double-ring” design that allows for visible RGB LEDs on both sides of the fan. This allows you to mount the fan in any orientation in your PC and you will still have RGB light.

The fans come with a 10-fan and 2-LED strip control hub along with a remote controller to tune the lighting effects to your liking. All of the mounting hardware is also included.

As mentioned before, the upHere RGB fans have double-sided LED rings. These rings provide bright, even lighting. The lighting and effects are easy to control via the included controller. upHere claims that the LED ring will “maintain color and brightness uniformity”, which I found true in my testing.

The upHere fans also feature custom-molded blades. They are translucent with a frosted texture that gives them a very unique appearance. The previous two fans (GIM and Asiahorse) both had clear and solid fan blades respectively. The upHere’s have a clear, but frosted blade that gives the appearance of solid black. But, when lit up, they will diffuse light and create an interesting lighting effect.

Additionally, the upHere RGB fans are quiet due to the rubber pad mounting points and blade design. The fans were designed for a specific speed in order to reach a desired decibel level.

The 120mm upHere RGB fans are great performers. They do not have individually controllable speed levels like the other two fans. But, their design is for 1100 RPM use and works well to achieve a 17.6 dBA operating volume.

The fans get power from 12V SATA and have a 40,000 hour life expectancy. They get plenty of power to keep airflow maximized in my ThermalTake View 31 RGB chassis.

Which 120mm RGB Fan Is Right For You?

Which 120mm RGB fan should you add to your gaming computer? Well, if it were me, I would go with the upHere RGB123-5 model. They provide the best light pattern and performance for what I need.

Although, I would not stop you from purchasing any of the others, because they performed great as well! If you’re building a new custom gaming computer, check out which RGB case is the best!