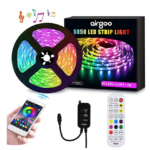 The Airgoo DreamColor RGB LED (6.6ft/2m) USB Strip is designed to be featured as a computer monitor or TV backlighting system. Check out the best budget RGB case fan kit!

Review by The Tech Guru – EveryHomeTech.com

In the case of the Airgoo DreamColor LED Strip, they have several features that make them one of the best choices when it comes to RGB lighting options.

The Airgoo DreamColor LED Strip is packed full of features that most have come to expect in modern LED strip lighting systems. They also include some newer technologies that make them a great choice for versatility.

One of the most prominent features is the Addressable RGB lighting system that comes standard on the DreamColor LEDs. These addressable RGBs can be individually adjusted for awesome unicorn vomit fun! Just as many LEDs, they play with 16 million color options and have several different settings to adjust those colors.

Another helpful feature is the ability for app control and remote control. This isn’t a common feature for on LED strips, but the they do have it! You can control the Airgoo DreamColor LED strip via the included IR remote control, smart phone app, or power adapter controller. I will go into more detail below on the functionality and usability of these, but it is a nice feature to have regardless.

Another awesome feature of the DreamColor LED strip is the music sensor. This RGB strip comes with a built-in high sensitivity mic, that will adjust the light brightness and colors based on the ambient sound. It will then adjust the lights and colors further following the music’s rhythm. There is 3 included modes (slow, relaxing, or dance) and each will fit a different type of personality.

This feature (music sensor) makes the Airgoo DreamColor LED strip a great choice for backlighting in bars or clubs due to it’s ability to make the place really party!

Another feature that the Airgoo DreamColor LED strip boasts is their flexibility and waterproof properties. These RGB LEDs are fully flexible to allow for bends that normally wouldn’t be allowed in traditional LED strips. The strip is also IP65 water resistant.

Some other minor features that are included are, but not limited to; 3M adhesive backing for easy mounting, long power cables to allow for easy setup, USB power to allow for control with a TV or monitor, and BRIGHT 5050 LEDs.

Setting up the Airgoo DreamColor LED strip was surprisingly easier than expected. The LED strip was easily bent around the outside of my TV (that I decided to mount it on) and the included TV mounting guide was extremely useful.

This guide laid out exactly what configuration would be best for my TV size (42-inch) and made it effortless.

Making bends in the LED strip was at first, quite daunting, but after doing a bit of research and knowing not to bed at the LED head points, capacitor points, or solder points it wasn’t too bad!

The Airgoo DreamColor LED strip is extremely easy to use with the included IR remote controller. Airgoo includes a diagram of what functions the controller does and how to use it. It’s a little complex at first, but with some playing around it gets a lot easier.

The IR remote control and smart phone app allow you to control the lighting settings on the DreamColor LED strip. In order to access the smart phone app you need to either scan the included QR code or search “Happy Lighting” on the app store.

The lighting controls included are:

The build quality of the Airgoo DreamColor LED strip is extremely good compared to other LED brands. I was very impressed at the amount of quality and sophistication with the product.

The only points I will take off for is occasionally my TV will randomly turn the strip on (it has only happened once in about a month), but I do believe that might be due to my sound bar.

There are several use case scenarios for LED lighting strips. As for this specific Airgoo DreamColor LED strip, I believe that it works extremely well for what it was designed for: TV or Monitor backlighting. These DreamColor RGBs would make a great addition to any home theater, room setup, office setup or gaming room!

In conclusion, the Airgoo DreamColor LED strip for TVs and Monitors is a great product that I found to work extremely well. I am very happy with the quality, precision and look of the DreamColor RGB strip and I will look forward to using more of Airgoo’s products in the future!