The Apevia RGB Fans (Twilight TL412L2S) Review is possible by affiliate links at no extra cost to you, thank you.

UPDATE June 2020: Apevia sold out of the Twilight series fans, but has just RESTOCKED! Check them out before they’re gone!

Apevia is a “gaming” and performance computer parts manufacturer. They’re most well-known for their computer chassis (cases), power supplies (PSU) and cooling solutions (fans, radiators, etc.). Apevia does also make RGB strips which are included in most of their fan kits.

The Apevia X-QPACK3 is a popular micro-atx computer case and one of their most popular products. Apevia also makes power supplies like the SFX-AP400W, and computer fans like the FR412L-RGB Frostblades.

The Apevia Twilight fans are unique to the other fan series because of their blend of hub-lighting and halo ring lighting. They give a similar look and style to the Corsair LL series RGB fans.

We’ll take a closer look, but from a first glance yes. They have a good build quality, great features and an overall premium feel. If you want to skip to our full opinion click here.

The Apevia Lunar Pro RGB Fans are their newest addition and they look incredible! 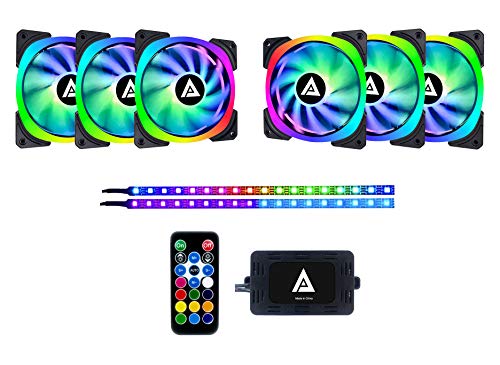 The Twilight series of Apevia RGB fan will be the focus of this review. This specific kit includes 4 120mm silent case addressable RGB fans and 2 magnetic addressable RGB lighting strips. Although, Apevia does offer other kits that come with more or less fans (this one seems to be the best value).

The control box included can support up to 6 Apevia RGB fans and 2 RGB light strips. There is a 4-pin connector that powers the fan hub and LED strips and a remote control that will control all of the lighting effects.

Apevia claims that there are up to 366 different color and style combinations. As well as controls to speed up or slow down the effects. There is also control of the brightness of the LEDs, but there is no fan speed control.

The fans spin at around 1350 RPM which is adequate to provide over 57 CFM of airflow. The Apevia fans have a sleeve bearing. A sleeve bearing is quite common and uses a lubricant to reduce friction at high speeds. They’re most common because they’re inexpensive to produce. Sleeve bearings typically maintain relatively low noise levels, but can develop a “whining” sound if mounted horizontal.

The rated noise level of the fans is 24.7 decibels which is low, but higher than some other competitors like the upHere RGB fans and Asiahorse RGB fans.

All of the mounting equipment is included in the package along with the 2 magnetic addressable Apevia LED strips. These LED strips also come with 3M adhesive on the backside if you prefer to mount them more permanently.

Another great RGB fan offering from Apevia is the Arcane series. The Arcane series fans are similar to the Twilight series. However, they do have a different, unique LED design. Personally, this design would fit very well with one of Apevia’s cases, like the X-QPACK3.

The Apevia RGB Arcane fans have many premium features similar to the Twilight series. They are quite honestly almost identical fans, except for the difference in LED design.

The included LED strips are each 1 foot (12 inches) in length and have a magnetic backing. They also come with 3M adhesive if you wish to permanently attach them.

The LEDs on the fans are individually addressable via the included controller. They have over 300 effects and animations you can use.

The Arcane series RGB fans include anti-vibration rubber mounts, along with 16 RGB LEDs.

How to Install the Apevia RGB Fans

Apevia includes a handy installation manual with their fans. It’s pretty simple to install the fans, but just remember to connect the fans in order to the hub.

This controller will allow you to connect the fans to an ARGB motherboard.

The Twilight Apevia RGB fans are easily one of my favorite looking RGB fans on the market. As I mentioned before, they are comparable in looks to the Corsair LL series fans. The difference being: they’re about one fourth of the price ($100 cheaper).

The Apevia fans held their own in performance, even against other cheap RGB fan competitors like the upHere RGB fans, LEDdess RGB fans, and Asiahorse RGB fans. The biggest downside is that they don’t have as much life expectancy or low-noise operation as other options. In addition, there is no way to connect the fans to your motherboard (no RGB sync software), but the included remote does work well. Finally, there is no fan speed control, but in my testing (my desktop sits under my desk) there was no noticeable sound annoyance.

But, for the price, I highly recommend the Apevia Twilight TL412L2S RGB fans as one of the best cheap RGB fan options you can buy!

The Apevia Twilight series fans keep selling out because they are awesome! If you’re interested in these fans, I would highly recommend to purchase them ASAP. In the case that the Twilight series is sold out, Apevia also has the Arcane and Spectra series. Both of which are very good as well!

As mentioned before, any Apevia fan is compatible with any Apevia case including: The Apevia X-QPACK3, Apevia X-DREAMER 4, Apevia X-Mirage, Apevia X-Hermes.