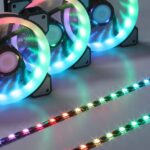 The LEDdess Addressable RGB Fan Review is possible due to affiliate links.

The LEDdess RGB case fans definitely earn a spot on the best budget RGB fans list. They are extremely well-priced and provide immense value when it comes to a budget RGB fan (or even premium RGB fan).

What is an Addressable RGB fan?

RGB LED technology has been on a rise over the past few years. This tech has advanced the way gamers and others have enhanced their setups. Allowing powerful color and theme adjustment at the press of a button can really upgrade an old boring setup. Manufacturers bring these RGB technologies to custom case fans to provide awesome effects and unique personalization!

Addressable RGB LEDs contain an IC in each individual package or module. They typically will have either a 4-pin RGB or 5-pin RGBW setup. 4-pin RGB has a RED, GREEN, and BLUE LED in a single discrete module. A 5-pin RGBW adds a WHITE LED in the same discrete package. Addressable RGBs can control each individual LED module and control them separately. It allows for some awesome lighting effects and higher customizability in your gaming setup.

Non-addressable RGB LEDs are similar to addressable RGBs, but the whole strip or array of LEDs can display only one color at a time. The colored LEDs can still have lighting effects, but each LED will have the same effect. It is “all or nothing”.

The LEDdess 120mm case fans are addressable RGB fans. This means that they can take advantage of each individual LED.

In the box, the LEDdess Addressable RGB fans come with 6 120mm case fans (you can also get a package with 3 RGB fans and 2 RGB strips). In the box is:

The remote control is very easy to use. It works well and you don’t have to point it at the control box. It uses a 3rd gen DS Hub that provides connectivity.

The fan controller hub can support up to 10 addressable RGB fans and 2 addressable LED strips. It is powered by a SATA power cable from your power supply.

The fans have over 300 lighting effects and they are all activated from the controller.

The LEDdess Addressable RGB fan comes packed with features that you would normally only find in premium RGB fans. DS LEDdess did a great job of combining value with premium features.

The 120mm case fans have a “unique halo arc-shaped frame” that provides a vivid visual display. The fans are very bright and provide accurate color depictions. I was pleasantly surprised with the amount of light output the fans have (you can adjust the lighting with 10 levels of brightness). The biggest complain I found was that the fans showed “LED hot spots”, but they quickly grew on me.

The LEDs can create a unique effect when they shine through the translucent custom fan blades. This creates a shimmering effect that is very unique and looks awesome!

The LEDdess Addressable RGB fans come equipped with rubber mounting points. This is a feature found only on premium case fans. The rubber mounts keep fan noise and vibration to a minimum while still providing strong efficient airflow.

Do the A-A03 ARGB Fans belong in the best budget RGB fans hall of fame? Well, absolutely. The LEDdess A-A03s are cheap RGB fans that have premium features while staying below the $40 price point. They slot themselves against the Asiahorse RGB fans, Aigo RGB fans, Apevia RGB fans, and upHere RGB fans. We compared many of these fans and I would highly recommend the LEDdess Addressable RGB fans as a great option for 120mm custom PC fans.