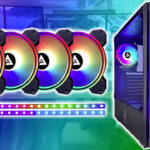 The Apevia ET42-RGB Electro ARGB Fan Review is possible due to readers and affiliates, thank you!

If you haven’t heard of Apevia, then you should 100% check out our Apevia RGB Fans In-Depth Review, and then come back. They are incredible. But, Apevia has been around since 1999 and has been creating computer gaming cases, power supplies, case fans and wires ever since.

We stumbled upon them when searching for RGB fans to upgrade one of our desktops. There are a lot of fans to choose from, but the Apevia RGB fans caught our eye because of their unique inner and outer illumination. This made for a compelling case to purchase these fans even when comparing them to more expensive fans.

Now, if you haven’t heard of Apevia, we wouldn’t blame you. But, if you’re considering one of the other high-end RGB fans (Corsair, Thermaltake) for your next gaming PC build, you should pause until you check these fans out.

Today we’ll be reviewing the Apevia Electro 120mm RGB fans which may or may not be our new favorites! 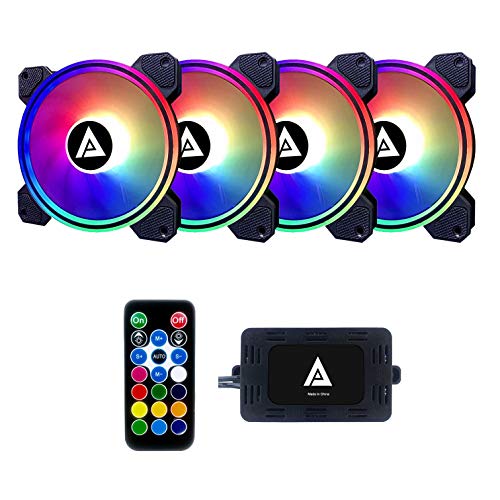 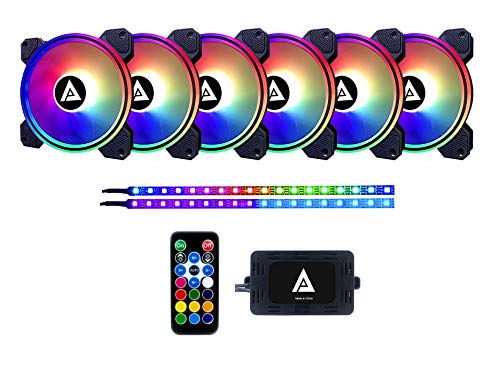 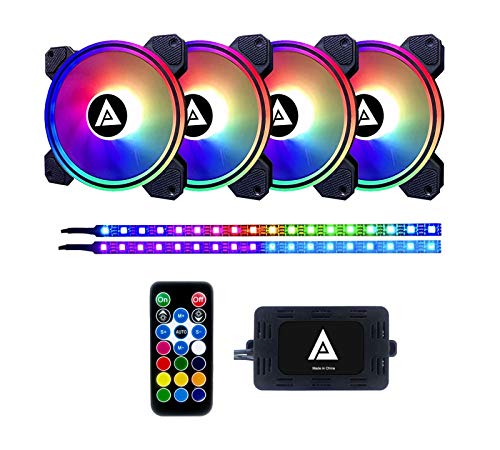 Now there are a few different versions of the Apevia Electro RGB fans that you can get, but we’ll be specifically looking at the ET42 (4 fans + 2 LED strips).

It is super handy that Apevia includes 2 RGB LED strips in the kit. Not only is it convenient, it adds a lot of value to the ARGB fan kit. There isn’t many other kits that include LED strips along with 4 fans.

So, starting off the features, the LED strip lights are fully addressable with individually controllable lights. They are all in sync with the included control box so that your fans and strips match up. In addition, they have a magnetic backing so you can mount them to your case with no issues.

The ARGB Electro fans themselves are 120mm in size. They have 28 individually addressable RGB LEDs (16 outer ring / 12 inner ring) that are controlled via the controller. Each fan has 8 anti-vibration rubber mounts to help them keep silent. In addition, the fans have a noise level of 24.7 dBa, which is very quiet. Adding to this is the 9 customize-designed fan blades.

The fans have a fan speed of 1350 +/- 10% RPM, but can be controlled via the controller. Life expectancy of the fans are around 25,000 hours. Additionally, all of the mounting hardware and screws are included. Apevia also promises high quality control standards and extensive reliability.

So how does the Apevia Electro RGB fan kit perform? Well, similar to the other Apevia fans we’ve tested, extremely well. When first unboxing the Apevia Electro fans, they are packed very well. The packing has each fan neatly packed and mounting hardware individually wrapped.

Installing the fans is relatively easy for any average PC builder. Basically all you have to do is put 4 screws in to mount a fan. Then, route the cables to the included controller. The hardest part is finding places to tuck away the wires.

After installing and hooking up everything, you just have to turn on your PC and you should have life! There LEDs are extremely bright and vibrant. The diffusion method is incredible well-done, considering the price. And, the fans keep all of the major components very cool.

Finally, the Apevia Electro fans are extremely quiet. They aren’t as quiet as some premium brands. But, are quiet enough that a PC under a desk or even slightly displaced from your main setup shouldn’t be heard. The 9-blade design and rubber mounts keep the vibrations to a minimum and noise down.

Are the Apevia Electro RGB fans worth your hard earned money? If you couldn’t tell already, absolutely. They are 100% some of the best, if not the best, budget RGB fans we’ve ever tested.

They hold up extremely well, are build like premium fans, and have a great looking design. When it comes to the Electro’s design, they are unique, bold and modern.

We recently got the Apevia Genesis mid-tower case (which comes with pre-installed Electro fans). And, we’ll be reviewing that soon, but the fans look incredible in that case. They’re incredibly bright and the awesome ring design complements it well.

Additionally, the inclusion of RGB LED strips is a great value. They work well, are bright and perform as expected. The magnetic backing makes them an easy install and without question should be used!

Concluding the Apevia Electro RGB fan review, we would say the biggest downside is the inability to adjust fan speed via PWM. PWM allows your motherboard to control the fan’s speed individually, however it is commonly found on much more expensive fans.

With that said, the Electro fans are an incredible value and should 100% be used if you’re in the market. If you were looking for a little different design, try the Twilight series fans instead!