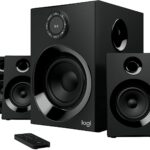 The Logitech Z606 5.1 Speaker Review is available due to readers and affiliates, thank you!

We’re always excited to review speakers. Especially, surround sound speakers systems because they’re always unique and exciting. Now, in the case of the Logitech Z606 speakers, they aren’t designed to be used with a TV necessarily. But, they are perfect for computer or PC use!

With that being said, you definitely can use them for a television application. However we tested them in our 144 square foot office that is a perfect size for these speakers. We’ll go into why this is perfect for them later, but let’s get into it!

If you have never heard of Logitech, then you might not know their reputation for equipment. They manufacture and produce several brands worth of gaming products, audio equipment and computer peripherals. While being most known for gaming, they also have high reputation for audio.

Starting off the Logitech Z606 5.1 Speaker Review with the main feature as the name suggests is it’s 5.1 surround sound speaker arrangement.

Now, the Logitech Z606 speakers are a true 5.1 surround sound setup. Which means that each speaker is dedicated to it’s specific channel (Left/Right, Rear/Front, Center, Subwoofer).

The speakers can produce up to 160 watts of room-filling sound with a 5.25-inch subwoofer. In addition, the satellite speakers have a 55 watt total combined output.

The subwoofer is used to controller basically the entire system. It houses the amp and Bluetooth controller. The system is equipped with a 3.5mm axillary jack and Bluetooth 4.2 for inputs. You can also use RCA cables to truly split each of the channels. This means that you can not only connect something wired, but also wirelessly.

In addition, you have to plug all of the speakers into the subwoofer, but this isn’t a problem due to their extra long (20 feet) cables. This allows you to completely control (for the most part) where you rear speakers are positioned. As mentioned before, you should technically place them in a side speaker configuration, but for our setup, we placed them in the rear.

Finally, the Z606 5.1 speakers have the ability to switch to a 2.1 speaker mode (uses the rear speakers as additional front speakers). This gives you a highly versatile speaker set that can be used in many combinations.

First, the installation process of the Logitech Z606 5.1 Speakers was extremely simple. There isn’t many wires to install and they’re clearly labeled and straightforward. Even if you’re a first time audio goer, this should be easy enough.

The satellite speakers are wall-mountable, however Logitech does not include the mounting hardware. It is a separate purchase. The subwoofer can be placed pretty much anywhere as long as it isn’t on something that will vibrate.

In regards to sound quality, the Logitech Z606 speakers don’t disappoint. They provide a decent sound volume, for the size and price, with crisp highs and mids. However, the bass can get a bit lost in some types of audio (depending on the type of movie or music).

The subwoofer isn’t massive, so it cannot produce ultra-low bass. But, as mentioned for the price, it performs very well. Additionally, you can adjust and optimize the sound to your liking which is handy. Along with being able to adjust volume levels.

It was a nice addition to see a speaker system include an RCA connection, especially if you aren’t using a dedicated amplifier. So, it is an easy hook-up for Blu-Ray and DVD players.

So, what’s the final verdict on the Logitech Z606 5.1 Surround Sound Speaker Review? We say that if you’re in the market for a budget friendly 5.1 surround sound system, then you can’t go wrong.

The Z606 is an incredible value for the price point. While the subwoofer isn’t as punchy as more expensive systems, it still does provide that extra layer of bass that is usually desired (if not needed). The satellite speakers have enough oomf to power through pretty much any movie or music. And, the addition of the RCA jackets is a much appreciated addition for anyone watching Blu-Rays or DVDs on this thing.

If you don’t have an amp, the Logitech Z606 is a great way to go. But, if you do, check out the Monoprice 5.1 System for around the same price.