The GIM RGB Case Fans Review is available due to readers and affiliates, thank you!

If you have ever shopped for budget RGB fans before, you’ll know that it can be difficult to find ones that are worth your money. One example of this are the GIM KB-24 RGB Case Fans.

One of the biggest advantages they have over other RGB fans is their support for a 5V ARGB motherboard header. The 5V ARGB header allows you to control RGB lighting via your motherboard’s included controller. This helps to sync your fan lighting with other RGB lighting that your case has or other components have.

It can be difficult to find affordable 5V ARGB fans because most of them are top tier Corsair or Thermaltake fans. However, these GIM RGB fans are definitely an option that won’t break the bank.

In this review, we’ll take a look at the features, design, and performance of the KB-24 RGB fans. In addition, we’ll give you our opinion whether these are worth your hard earned money or not. 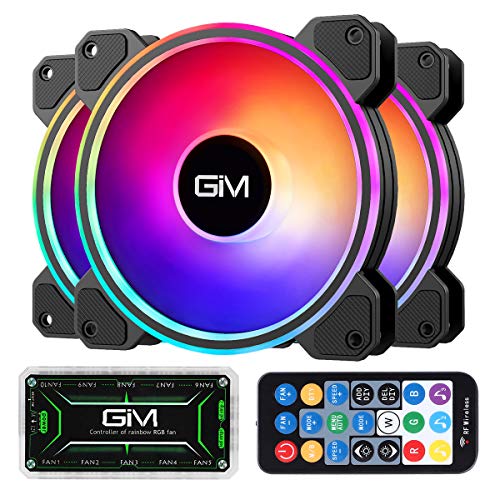 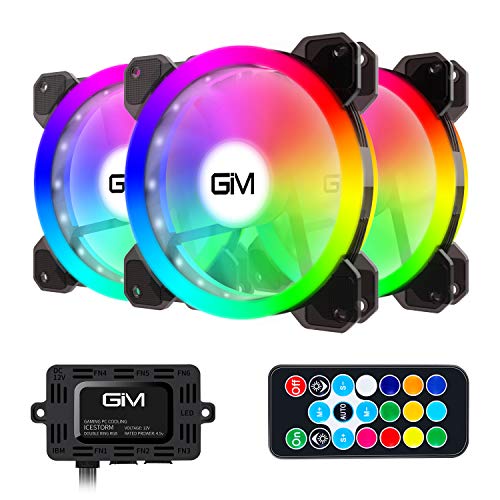 Starting off with the features of the KM-24 RGB Case Fans. These are 120mm fans designed for custom PC building.

They are special because of their 5V ARGB header connection. The fans, as mentioned before, can be controlled via your motherboard’s RGB sync software. This allows you to sync the GIM fans with other RGB components and case elements.

Additionally, the fans have completely independently controlled RGB LEDs. The LEDs (if not controlled by your motherboard) are controlled by an included remote control. There are several lighting effects included along with 3 music modes. The music modes allow you to sync your lighting with audio to provide cool looking visual effects.

The fans are controlled by an included control box. You just need to attach the control box to a SATA power cable, and then plug the ARGB 5V connector into your motherboard. However, if your motherboard does not have an ARGB connection, you can use the included remote to control the fans.

You can mount the control box pretty much anywhere inside your case that it fits. And, mounting the fans is as simple and screwing 4 screws into the corners of the fans. Installing new fans is one of the easiest PC upgrades you can make!

The GIM RGB case fans provide decent performance (especially for the price). They’re extremely well valued fans when it comes to RGB lighting and performance. Not only do they push a fair amount of air, they are extremely quiet as well.

The KB-24 fans are rated at 15 decibels which is very quiet, especially for cheaper fans. Additionally, they have probably shouldn’t be used as radiator fans for serious overclockers. However, in our testing, using them as radiator fans for an AIO cooler for a processor that isn’t overclocked should be just fine.

You use the remote to control the fans speed (L/M/H) anywhere from 0-1300 RPM which is a medium speed as far as fans are concerned. There are faster fans, but with faster RPM comes a louder fan. So, it depends what you want to compromise on.

So, should you purchase the GIM KB-24 fans? For the price they are at and the 5% off coupon, these RGB fans are 100% worth it. They are an incredible value, even without the coupon.

There isn’t many other RGB fans that come in with this much value in a single package. ARGB fans are hard to fine, let alone at this price. The addressable LEDs let you completely control what the fans do. Some might not need this ability, but we appreciated it tremendously.

Additionally, the sound, performance and flow of the fans are all comparable to more premium fans. Now the design, as far as we’re concerned, looks great. It is similar to the Apevia Electro fans that we recently reviewed.

If you’re in the market for budget ARGB fans, then the GIM KB-24’s are worth trying out.