What is RGBIC? RGB vs RGBIC? What is better? Today we’ll be answering all of your questions regarding RGB lights and what RGBIC is.

As RGB technology is becoming more and more advanced, it becomes increasingly more important for everyone to understand the differences in what they’re purchasing. Because, knowledge=power, and purchasing power is always an important thing to have (learn more about LED chips).

When it comes to RGBIC Lights, the Govee has some of the BEST on the market, hands-down! Check out their side for awesome sales for this season, new technologies that are hitting the market, and awesome LED lights! 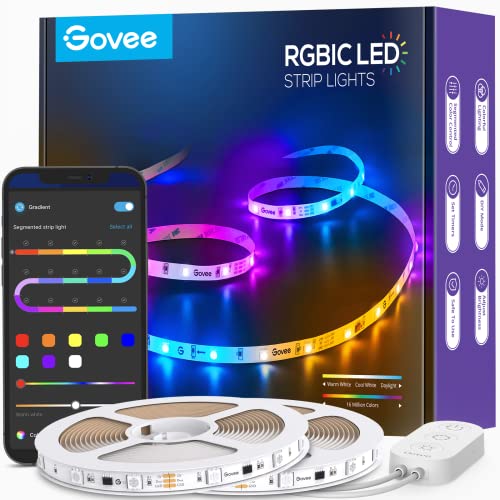 What is RGBIC? [Addressable RGB]

RGBIC is essentially an addressable RGB LED strip. Addressable RGB strips allow you to completely control each LED chip independently from any other chip (learn more).

With this ability developers can create awesome lighting effects that are built-into the strips. Or, they can even offer you the ability to create your own (Govee RGBIC LED Strips).

RGBIC LED Light Strips are awesome for lighting applications that require a montage of creative effects. For example, if you want your lights to flash to music, then a fully RGBIC system will look a lot better than one that isn’t. However, if you are mounting an LED light strip for purely a backlight effect (such as behind a TV), then you might only need one solid color at a time.

What is RGB? [Non-Addressable RGB]

Non-addressable RGB is a typical RGB LED light strip where each individual LED chip is not independently controlled. You cannot specifically address a certain LED chip to turn on or change color by itself.

These types of LED strips were very popular a few years ago, but as technology has improved, there has been a substantial increase in ARGB strips. Although the effects might not be as cool, you might not even need the extra benefits of ARGB (RGBIC). In that case, not only are non-addressable RGB lights cheaper, they can be potentially more reliable as well.

While this isn’t a review of these specific GOVEE RGBIC LED Strip Lights, they are a great example of an awesome product. These lights can be controlled and customized several different ways; the Govee Home app, the remote, or the control box. The DIY mode allows you to fully personalize your effects and create your own custom moods.

These LED strip lights are extremely easy to setup and have been very reliable so far in day-to-day use. As a disclaimer, we have experienced some issues using the smart phone app (mostly getting it to connect), however a simple unplug fixes it.

These are the standard Govee Color Changing LED Strip Lights. They are very similar to the previous lights, however they don’t feature the RGBIC addressable RGB lighting. When it comes to price, they can typically be found for around $20-30 cheaper on average.

They still have 3 control options including the Govee Home app, control box or included remote. Additionally, they still have a music mode and customizable moods. Although, they aren’t as customizable as the RGBIC ones are. When it comes to the quality difference, they do have a similar premium quality, however we do prefer the ladder.