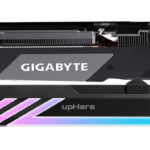 Check out our review of the upHere RGB case fans!

What is Graphics Card Sag?

Why is GPU sag bad? GPU sag can be bad because any unexpected stress on the PCI-e lane or graphics card components could cause tears in the wiring. It could also cause a fixture to rip off.

How to Stop, Prevent and Fix Graphics Card (GPU) Sag?

Should you fix your GPU sag? Regardless of if it is harmless or not, you want to protect your investment. Graphics cards are not cheap and luckily the upHere GPU Support brace is a cheap fix for GPU sag!

How do you stop and fix GPU (graphics card) sag? Fixing GPU sag is not as easy as it seems. There are some gamers who might create a “home remedy” with toothpicks, straws or strings. But, none of those home remedies will fix the sag for good.

The upHere addressable RGB graphics card (GPU) support brace bracket holder is a product designed to eliminate video card sag. The upHere GPU bracket stops sag by supporting your graphics card with a solid aluminum brace. They claim it will work with a wide range of graphics cards and motherboards, but it was tested on an ASUS Strix GTX 1060 6GB card. While the bracket’s dimensions are 280mm x 54mm x 9mm, it will fit most graphics cards that are bigger.

In addition to providing support, the upHere RGB GPU support brace features addressable RGB lighting. These high-end RGB LEDs are individually controllable via a 5V 3-pin header on your motherboard. This allows the RGB GPU bracket to sync with other RGB gear. In addition, ARGB LEDs have a life expectancy of more than 30,000 hours.

In the package, you should expect the GPU support brace and 6 mounting screws and 2 rubber pads. It is extremely easy to install and can be attempted be the most novice of computer builders. There is a sliding rubber pad that is used to support the video card along with high-quality aluminum that it’s made from.

Does the upHere RGB GPU support brace help to fix GPU sag? Yes it does. Does it do it in style? Yes it does. The upHere GPU bracket delivered as promised and it will impact the look and style of your custom PC as well.