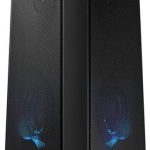 Today, in the Samsung MX-T40 Sound Tower Review we’ll be taking a look at the features, build quality, performance and a buying decision!

Samsung makes some of our favorite sound systems. We have a lot of reviews on Samsung products such as the Guide to the Best Samsung Soundbar. But, today we’re looking at one of their newer products, and one that’s has an interesting design.

This sound tower is designed to compete with some of the best party speakers, and combat the epic list of sound bars that exist. Additionally, Samsung aims to target the audience that wishes to have powerful, but compact speaker systems.

With that being said, let’s get into this review!

Starting off with the build quality of the Samsung MX-T40 Sound Tower. As with most Samsung products, they offer a fairly premium build. The main pieces of the sound tower are a high-quality ABS plastic with the grills being made of aluminum.

There are several buttons on the top of the triangular tower and they feel well-made. They are clicky with a tactile response feel. Additionally, the included remote has a decently high-quality feel, but quite honestly probably will not get a lot of use.

Finally, the only included hardware other than the device and remote is the power cord. It seems sturdy and well-built, similar to other Samsung cords.

Next up are the features of the MX-T40. Firstly, Samsung uses a variety of speakers (4 total drivers) to produce a wonderful bi-directional sound stage. The unique triangular shape allows them to completely fill the room with sound.

Additionally they have a LED light function. There is built-in LED lights illuminating each of the drivers. You can rotate through up to 5 different color options, or just turn them off completely. With everything being LED lit this day in age, it is nice that Samsung includes a mature lighting setup.

There is an included bass booster function that boosts bass with the press of a button (very common on modern speakers). In addition, there is a dynamic bass function that actively evaluates the bass trend and will boost bass in songs that require boosting. Inputs for the MX-T40 include RCA, Bluetooth, auxiliary, or USB (USB can be used for firmware upgrades as well).

Finally, we saved the best for last (in our opinion). Samsung built-in group play. Group play allows you to connect up to 10 of their Samsung Sound Tower’s for a rich, wide sound stage. They connect wirelessly to each other or you can use the built-in analog connections. You can also use this feature to connect to a Samsung TV.

As far as performance is concerned the Samsung MX-T40 Sound Tower sounds awesome. It uses 4 high-quality drivers to output a total of 300 watts. This powerful little speaker system does well in small to medium sized rooms or even outdoors.

Pairing two or more of them together creates an excellently cast sound stage with fairly high-quality separation. You can easily use them outdoors for a backyard setup, or in your home as a living room setup.

While you can connect them to your Samsung TV, if you have a traditional theater setup, you might want to stick with that. However, if you don’t have a dedicated soundbar or speaker system, then the sound towers will definitely do the job!