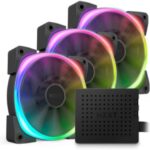 The NZXT Aer RGB 2 Review is possible due to affiliates and readers, thank you.

NZXT has been around since 2004 and they have been manufacturing computer cases, parts, LED lighting and other various gaming parts (source). While they are extremely popular among gamers, their AER RGB fans sometimes get overlooked.

While they don’t have as much RGB lighting as some other 120mm case fans, they are one of the most unique on the market. The NZXT AER RGB 2 fans have an incredibly unique and subjectively good-looking design. It helps edge them out against other popular high performance case fans.

Starting off with the features of the AER RGB 2 fans. Firstly, they come in two variants; 120mm and 140mm. Which, already sets them apart from other RGB fans, because most don’t come in 140mm models.

The AER RGB 2 fans are also performance engineered for static pressure. This means that you can use them with a static pressure radiator (such as an AIO liquid cooler). In addition, their unique shape allows them to create awesome visual lighting effects and uniform light dispersion.

The fan blades are designed with winglet tips for maximum performance. This design choice helps to reduce drag and increase efficiency. Also, NZXT uses a fluid dynamic bearing. This means that the fans main hub is lubricated in their own patented fluid. The bearings are made of copper and designed to maintain consistent lubrication and reduce operating noise.

Along with reducing noise and improving performance, fluid dynamic bearings also have a long lifespan. They can last for up to 300,000 hours, which is extremely long compared to other RGB fans.

Finally, they are PWM and ARGB fans. The ARGB means that they have completely individually addressable RGB LEDs built-in. And, the PWM means that their speed can be controlled via your motherboard’s PWM fan controller ports.

So how do the AER RGB 2 fans perform? Are they any good?

Well, they’re quite amazing actually. They perform extremely well and work great if you pair them with one of NZXT’s AIO coolers. They are quiet, cool your components down well and should last a long long time.

The lighting effects are awesome. While these aren’t as “flashy” as some of the other RGB fans, they definitely don’t disappoint. The LEDs are bright, colorful and uniform.

In addition, NZXT has several other lighting options that will all sync together with your RGB fans. This makes for a simple synchronized design.

For gaming, these fans work great. Since they are PWM controlled, you can completely control the curve within your motherboard’s software.

The NZXT ARGB Fan Controller is part of the starter pack and deserves to be mentioned by itself. With the controller you can connect up to 3 fans with a max output of 10W per channel. It also has built-in noise detection to prevent unwanted lighting artifact.

In addition, two NZXT RGB lighting channels can support up to 40 individually addressable LEDs for 80 total. It can also support up to 6 devices or 40 LEDs per channel (which is a huge number of LEDs).

You can also use this controller for other NZXT accessories such as NZXT Underglow, Cable Comb, or LED strips. In addition, you use NZXT CAM software to completely control your RGB lighting and effects.

If you’re considering the NZXT AER RGB 2 Fans, either 120mm or 140mm, we’d highly recommend them. You won’t be disappointed with their performance, design or functionality.

While, as mentioned before, they aren’t the most flashy RGB fans, they definitely provide the perfect amount of accent lighting. It will give your next gaming build that extra bit of zap to make it look incredible.