What is the Best LED Rainfall Shower Head? Today I’m going to be going over some of our top picks for LED Shower Systems!

We’ll be taking a look at the features, build quality, how they perform, and which one you should buy for your next house project. Recently, we took a look at Best LED Bluetooth Bathroom Mirrors, and these showers complement the modern style of the mirrors very well.

What is the point of the LED shower head? Well, it not only gives your shower a modern look, but can be function in dim lighting. It illuminates the water flowing out of the waterfall or rainfall head, giving you a brighter experience. 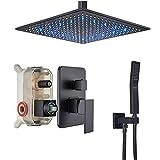 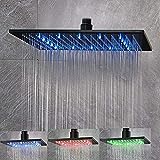 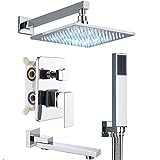 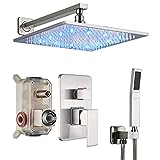 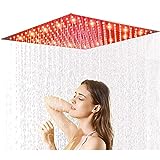 What is a LED Rainfall Shower System?

Some systems might include a Bluetooth speaker function, multiple shower controls, tub spout, and more. Similar to a steam shower system, but without the cost, a rainfall shower head can easily be an impressive upgrade.

Starting off with the ELLO&ALLO EPS LED 6-Function Shower Head. This shower head comes in a few different color schemes and modes. You can either pick from a brushed black or stainless steel color. And, choose from a 6-mode option or 5-mode option.

There is multi-outlet switches to control different water effects and combinations. And, in addition, there are 4 adjustable jet nozzles for different massage options. Finally, there are 3 adjustable settings on the handheld shower head itself. You can have 2 jets or nozzles on at the same time. If you have enough water pressure, you should have no issue achieving that.

Last but not least, there is a 2-year limited warranty from the date of purchase. So, if any of the parts were to fail, you can contact ELLO&ALLO for warranty help.

Next up is the AUKTOPT LED Shower Panel Tower. This is a 5-mode split shower design that offers several high-end features. The features include; rainfall head, massaging jets, tub spout, handheld head, and water temperature monitoring.

As far as build quality is concerned, AUKTOPT uses silicone nozzles to ensure that calcium won’t clog them up. Additionally, the system is built from 304 stainless steel with a brushed black finish. It has a very modern and clean style that looks great with the modern LED Bluetooth Bathroom Mirrors.

There is a 2-function handheld unit that is perfect for washing yourself, and even for washing out your shower. For the built-in LED shower head light you can easily turn it on by pressing a simple switch. It works via 2 AA batteries and should have a fairly decent battery life.

Finally, AUKTOPT offers lifetime support for their products, and will provide any replacement parts needed in the future.

The Blue Ocean Shower Panel Tower with Rainfall Shower Head is our bonus item for this guide. Why is it a bonus item? Well, because it technically doesn’t really have any LED lighting. However, it does make up for it with it’s mass of 8 multi-functional jets.

It qualifies under ISO-9001 standard, and it’s made from high-quality materials like aluminum, and other metalloids. There is a mirror-like tempered glass surface, temperature display, rainfall head, and high-pressure massage nozzles.

In the end, what is the Best LED Rainfall Shower Head? In my opinion, my top pick is the ELLO&ALLO Stainless Steel Panel Tower LED Head. For my use it had the perfect color combination, feature set, and performance to back it up. Additionally, it provides 6-mode functionality that is not only useful, but has a modern design.

When using the ELLO&ALLO Shower Head with other more modern bathroom accents, you can really elevate your bathroom’s style and usability.