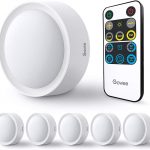 Today we’ll be reviewing the Govee LED Puck Lights. These are simple LED lights that you can mount pretty much anywhere. They are extremely easy to use and simple to setup.

Govee sent us out these lights to test out, and if you want to find out how to purchase them, please visit Govee’s website.

We’ve taken a look at similar LED lighting products, but these are the first that use battery power. What makes them unique? Well, battery power allows you to put these lights pretty much anywhere, and you don’t need any wired source of power.

With that said, let’s get into it!

In the box of the Govee LED Puck Lights is several items.

The LED pucks are packaged quite well, each being individually wrapped. Additionally, each type of mounting hardware is neatly organized and wrapped in their own separate baggies. This isn’t huge, but it makes a big difference when comparing organization to other brands.

Finally, the included remote is packed on it’s own, with an included battery. The battery just requires a simple pull tab to be pulled out to allow for use.

Taking the pucks out of their packaging reveals their build quality (which is surprisingly extremely good). After pulling off the packaging, the LED pucks are revealed to made from a really premium-feeling plastic material. It is not glossy and has an extremely satisfying matte finish.

The top of the puck has a frosted and raised design that is not only made to diffuse light, but also as one way to activate the lights (which we’ll go into more in the Performance section).

As far as the remote goes, it is extremely easy to use, and also features a fairly premium feel. You can easily use the remote to turn on several pucks at once without even pointing directly at them, which is a very useful feature.

Additionally, you can press directly on the top of the puck to active them. But, we’ll again go into more detail about how they function later-on.

Finally, the mounting hardware is extremely high-quality and easy to use. We chose to go with the 3M mounting stickers. They are strong enough to hold to a wall, specifically one in a closet, and the puck at the same time. We haven’t had any issues with the adhesive not being strong enough in the almost week’s time they have been mounted.

As far as performance goes, they work extremely well and as described. Firstly, you do need to have 3 AA batteries in each puck. Unlocking the bottom of the puck and inserting the batteries is simple, and can be done even when they are mounted.

Once you have batteries in, illuminating them comes with three different brightness levels. At the brightest level, they are extremely bright and easily will light up a small closet or cupboard without issue. Using them as countertop illumination also works really well.

The remote features a timer function that allows you to specifically set exactly how long the lights will stay on. Since we installed them in a closet, we have just been activating and deactivating them via the remote. However, if you had them in your kitchen, you could set the timer to go off 15 minutes after you leave, or something along those lines.

Finally for performance, the actual brightness and illumination of the lights is very good. With the LED puck’s on full brightness, you can expect several hours out of the batteries. However, the biggest negative we found with the Govee LED puck lights is that they do not have any RGB lighting. Although this might not be an issue for most people.

In conclusion, when it comes to the Govee LED Puck Lights, we were very impressed. They function exactly as they are supposed to, and we had really no issues setting them up.

A few knocks are that they don’t feature RGB lighting, but once again, most buyers probably won’t care. And, their battery life could be a bit longer, or at least could feature some sort of wired options.

With those things aside, the Govee LED Puck Lights are an awesome option for several use case scenarios. These use cases, can include; bedroom/night-light lighting, closet lighting, bathroom lighting, cupboard lighting, under-cabinet lighting, etc.

READ: Check out our other LED Lighting Reviews!