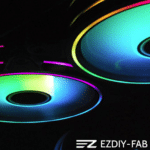 The EZDIY-FAB RGB Fan Review is possible due to affiliate links, thank you (this review is not sponsored).

In addition to the Moonlight RGB Fan, we highly recommend the other RGB case fan models found on the EZDIY-FAB website.

RGB case fans are one of the more common easy to install custom PC mods. New fans will bring life to your PC and a unique look to your setup. I recently, reviewed the Apevia RGB fans and finally found a cheap RGB fan to rival them.

The biggest difference between the Apevia fans and the EZDIY-FAB fans is the way they connect to your computer. They both can connect with an included fan hub and controller.

But, the EZDIY-FAB Moonlight fans connect directly to your motherboard’s 5V 3-pin ARGB header. I’ll go over how this works, but basically it makes your life a lot easier when trying to sync RGB effects! 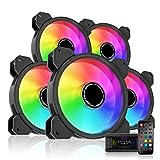 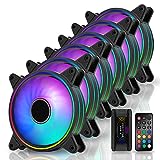 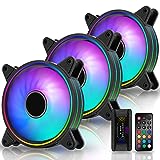 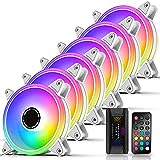 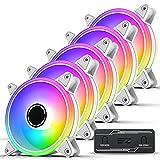 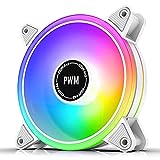 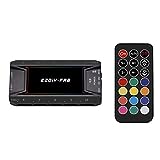 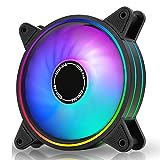 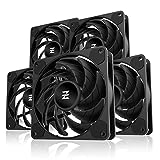 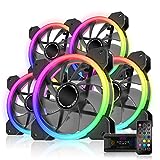 The EZDIY-FAB RGB fans are perfect for beginner PC builders looking for a cheap RGB fan. However, they are also perfect for advanced PC builders requiring a great value.

These RGB fans come equipped with a unique outer RGB LED ring along with an illuminated center hub. This gives them a very unique look compared to even Corsair’s QL series fans or Thermaltake’s Riing Series fans.

Starting off the features of the EZDIY-FAB RGB fans with their awesome ring and center hub lighting. The fans have addressable LEDs lining the outside ring and the center hub of the fan. These RGB LEDs are controlled via a 5V 3-pin ARGB header on your motherboard. This allows you to have full control over the RGB lighting. In addition, this means that you can sync these fans perfectly with other RGB parts of your PC.

Each EZDIY-FAB RGB fan also comes with 11 white frosted fan blades. These fan blades allow light to be diffused for the best appearance. Additionally, you will notice the uniform color and brightness due to the frosted blades, eliminating most hot spots. The RGB fan provides a bright, luminous glow that will compliment any gaming PC very well.

Another great feature of the EZDIY-FAB fans is their ability to be controlled with PWM. PWM is pulse-width modulation. Because these fans have PWM control, they have more control for fan speed and efficiency.

The EZDIY-FAB Moonlight fans performed extremely well in our testing. You should see near silent performance with the 11 custom fan blades. They are designed to increase convection efficiency and improve heat dissipation. In addition, they come with rubber insulated mounting points to help reduce vibration and noise significantly.

The fans can spin anywhere from near silent at 300 RPM to 1600 RPM to maximize airflow (35.8 CFM max). The EZDIY-FAB website lists these numbers and I found them to be true in testing.

What’s in the box?

How to Install the EZDIY-FAB RGB Fans

Installing the EZDIY-FAB Moonlight 5-pack of fans is fairly straight forward. If you have never installed a case fan before, we have a guide to walk you through it. But, for more experienced builders, these should be very similar to any other fans.

Firstly, you mount the fans wherever you’d like in your case. Secondly, you would attach the fans to the included fan control hub. Then, power the fan hub with a SATA connector, and connect the hub to your motherboard’s 5V 3-pin ARGB and PWM headers. Finally, you can either use the included controls on the hub or hold the button for 3 seconds to sync to your motherboard.

In addition to the Moonlight fans, EZDIY-FAB also has these 120mm ARGB PWM fans. ARGB fans are difficult to find in an affordable form. However not only are these addressable, but PWM as well.

PWM allows your motherboard to control the fans speed so that they can follow a fan curve. This allows you to customize your cooling, decrease noise levels and increase performance. In addition, they allow you to customize the lighting with fully addressable LEDs. ARGB headers on your motherboard allow you to individually control each LED on the fans and included LED lighting strips.

These ARGB PWM fans can be a great alternative to the Moonlight fans. Or, they can even be used in conjunction with them!

In regards to the actual fans, they are phenomenal. They are cheap, reliable, premium feature packed and actually work. The RGB lighting is done very well and they are easily controlled with your motherboard. Their biggest upside is they are one third of the price of any “big name” RGB fan, but deliver on a similar level.

If you want fans with more control without an ARGB header, check out the Apevia RGB Fan Review!