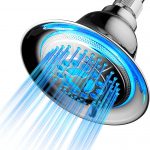 In the DreamSpa Shower Head Review we’ll be taking a look at the LED color changing shower head! This shower head has LED lights in it that provide a variety of cool effects, and can add a modern accent to your bathroom project.

Starting off with the build quality of the DreamSpa Shower Head. It is made from a quality premium ABS material that has a chrome coating. In addition, it has standard shower head connections.

There is no power components or batteries required. All of the LED lighting is self-sufficient and powered by running water (video explanation of the process). The face of the shower head is an extra-large 5.25-inches with a reflective perimeter rim.

Additionally, when it comes to installation, it should be a completely tool-free install. And, it should fit on any standard shower arm.

Next up is the features. DreamSpa includes a variety of features that range from color changing effects, to different spray modes.

The 5 modes include: power rain, pulsating massage, hydro-mist, economy rain, and water-saving pulse. Additionally, there is a high-power 3-zone dial with jets and an adjustment level.

As far as performance goes, the DreamSpa Shower Head performs very well. It is a great addition to a modern bathroom or a fun accent to a kid’s bathroom. Installation is fairly simple and doesn’t leak even if you don’t use teflon tape.

For kid’s, it has the benefit of making a shower seem “more attractive” prior to bedtime, and for adults adds a modern touch to a bathroom. Especially if you have an LED bathroom mirror, or some other fun LED decorations. Also, showering in the dark (or when you loose power) is a fun process.

The different modes work as indented and the lights do change color depending on the water temperature. When it comes to switching modes, the clicking mechanism is a little hard to turn, but that could be read as “robust” as well.

How to Install the DreamSpa Shower Head

First, prior to installing, you’ll need to remove your old shower head.
Try turning the showerhead by hand counter-clockwise to remove it.
If you can remove it by hand, proceed to Step 2.

If not, wrap the jaws of slip-joint pliers with electrical tape or place a towel around
the shower arm to protect the finish, and then grip the shower arm with the pliers.
Use an adjustable wrench to loosen and unscrew the old showerhead.

Clean off any rust or mineral deposits, old tape, or leftover sealant on the shower arm threads.

Wrap Teflon tape in a clockwise direction two or three times around the threads of the shower arm.
Press the tape into the threads.

Hand screw on the new LED Showerhead. And your done.