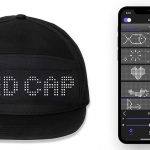 In this Chemion LED Hat Review, I’ll take a look at the features, build quality and performance of this led display cap!

Are you a DJ looking for the next fun thing? Or perhaps are you attending a party where you want to show-off to your friends? Or maybe you just want something new and cool?

Well, the Chemion LED hat can help you out with all of those problems. This baseball-style cap is has an LED display on the front of it allowing you to completely control what is shown.

Chemion is a LED company known for their LED glasses, and masks. But, they also have LED hats! And, as LED technology keeps getting better, it becomes more viable to put LED displays on articles of clothing. It can be a great accessory for anyone looking for the next “fun” trend.

But, with that being said, let’s get into it!

Starting off with the features of the Chemion LED hat. Firstly, it has a relatively large LED panel on the front from of the hat. Right now it only comes in a black and white panel, but there are plans for a color version.

The display itself is fully customizable. You can download the Chemion app, which will give you access to thousands of custom and preset designs. In addition, you can use your own designs, text, or patterns. You can also use a music mode to display a stylish analyzer.

In my opinion, the analyzer is one of the coolest effects. It is perfect for DJ’s or people are parties where the music is quite literally the main show. I think that it could potentially be a trend that will catch on amongst those crowds.

As far as build quality is concerned, the Chemion hat is made from 100% cotton. It feels just like a normal hat. The LED’s on the front of the hat feel rather high-quality for the price, and don’t give the impression they’ll break.

It does have Bluetooth 4.0 built-in for connection to your mobile device. This connection allows you to control the display with your phone. Additionally, there is a built-in battery. They include the charging cable (USB) in the box, and it only takes about 2 hours to fully charge.

Once fully charged, you can expect up to 6 hours of performance.

When it comes to performance, Chemion doesn’t disappoint. The LED hat works exactly as expected. It is a standard baseball-cap style hat that you can put on your head (one size fits all), and is relatively comfortable.

The app is simple to work and even younger children (7 years old) can easily work it. Setup is a breeze as well. Just turn it on, and follow the instructions in the manual.

To be honest, there isn’t much to it. The hat works as expected, and should be fine for whatever you’re purchasing it for.

The biggest downside is that it doesn’t have a color option. However, you can find other color LED hats out there! But, it isn’t that big of a deal, especially for someone who isn’t looking to pay a crazy premium.