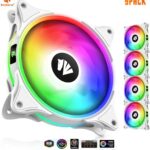 The Asiahorse RGB Fans Review is possible due to readers and affiliates, thank you.

If you have been reading our site for a while, you’ll have seen a lot of reviews for RGB fans. The reason being is simply that they’re a cool part of building a PC.

The fans we have today are from Asiahorse. Asiahorse is a computer parts manufacturer that is best known for their RGB fans, sleeved cables and other accessories.

Their motto is, “to create high-performance, superior quality and cost-effective products”. As far as their RGB fans are considered, they definitely pack a punch for value. Let’s check them out!

The FS-9002 model fans are white ARGB 120mm case fans. They are awesome-looking (in our opinion), and allow you to have complete control over their settings.

If you don’t want to use this or don’t have an ARGB header, you can use the included fan controller instead. ARGB headers also let you sync your RGB settings with other PC components. The included controller offers 4 preset colors, several effects and modes and 4 speeds.

Next, the Asiahorse RGB fans have 20 LED lights in the outer ring and 8 LEDs in the center hub. These are similar in design to the Apevia RGB fans. With a total of 28 LEDs, you can really customize the look and experience of the fans.

Finally, the fans are premium built for durability and performance. The LEDs use gold wire material that effectively decreases exhaustion. Additionally, Asiahorse uses a hydraulic self-lubricating bearing. Hydraulic bearings use a friction-reducing substance for quiet operation.

So, these fans are the FS-N001 model. This model is not the main focus of this review. But, we thought we’d suggest them because they offer a slightly more attractive design (for some builds).

The FS-N001 model is basically identical to the FS-9002 model, except for the looks.

Firstly, the unboxing experience is quite good. Asiahorse definitely put some time into their packaging.

Next, is the PWM and ARGB control. They work very well, with no issues. We have no complaints with manufacturers that give us working PWM and ARGB.

The LEDs are very bright and colorful. They have accurate and bright color depiction. In addition, the LED light is very diffuse, providing a premium look.

The included remote and control hub are very cool! They’re basic, but work as described and will do if you don’t have the inputs on your motherboard.

We couldn’t find a 100% accurate fan speed description, but they are on the slower end. The remote includes 4 fan speed settings. However, honestly, the Asiahorse RGB fans do a great job of cooling. They also remain fairly silent.

The biggest con is Asiahorse might have skimped out on some of the materials. For example, the wires are definitely cheaper than some other fans. But, honestly, has not been a big deal.

The other portion that feels a bit on the cheaper end is the control hub. But, at the same time, you should be using PWM and ARGB headers anyways!

The Asiahorse RGB fans definitely delivered. As far as RGB fans are concerned, they are one of the top we have used.

They provide accurate, bright and reliable LED light. In addition, Asiahorse offers complete control over your RGB fans with ARGB and PWM control.

They have a mostly premium feel and performance. We wouldn’t recommend using them as a primary water cooling fan if you’re severely overclocking. However, for most basic users, they work perfectly!