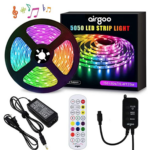 The Airgoo DreamColor LED Strip Review is made possible from the support of everyone reading this, thank you.

LED strip lights have been around for quite a while, but just recently they really started exploding with the development of RGB in a compact, low-heat form. The advancement of this technology has led many into making awesome looking gaming, home theater, and office setups because of the immersive lighting effects possible.

These effects can greatly increase the “show” of your setup, home theater or any other application that you can use them for. The Airgoo DreamColor LED Strip is able to use powerful IC chips to individually control each LED creating colors, patterns and effects that will blow your mind!

Why LED Strips Are Important

Creating RGB LED lighting that isn’t just “unicorn vomit”, but a impactful, feeling-inducing experience is difficult. But, with the right LED strip and effects it can be made possible.

RGB lighting effects were once exclusive for only clubs, bars or high-end estates, but now as LED technology has become much more affordable, we are all able to use this awesome tech. RGB LED strips kits add atmosphere and unique aesthetics that enhance setups.

The Airgoo DreamColor LED strip has several features that will not only improve the overall experience of the product, but provide a unique take on the RGB LED segment. This RGB LED strip is very useful in theater, club or bar settings due to it’s built-in high sensitivity microphone with the ability to automatically adjust lighting.

The specifications of the DreamColor RGB LEDs are standard for the segment, but do offer some things that the competitors do not. The strip is 16.4ft/5m long, with a 1.5m long adapter cable. There are 10 levels of brightness, 10 levels of speed adjustment, over 16 million colors, and a LED life expectancy of 50,000 hours.

The built-in high sensitivity mic allows for automatic adjustments of lighting based on ambient sounds. The LED lights will then change colors depending on the music’s rhythm and volume. This feature is one of my personal favorites, especially when you have a room that is all “music controlled”. It gives a unique vibe and incredible character to the LED strip.

Another feature is the remote control and built-in controller. This feature makes it easy to control the Airgoo DreamColor LED strip and create the desired effect. I found one of coolest effects to be the “unicorn rainbow vomit” and the “chasing LED” modes.

Another commonly overlooked feature on a lot of “cheap Chinese LED strip kits” is that the Airgoo DreamColor LED strip kit comes with very long adapter cables and wiring. The actual power adapter cord is long and the cord to attach the LED strip is long as well.

The LED light strips are 12V and are equipped with circuit protection. They also have a memory function that prevent the lights from loosing their previous mode when turning off. They also are waterproof, low-heat and 5050 LEDs.

5050 LEDs are large LED housings with four separate LED chips. They are have several available colors and allow for great backlighting and general lighting options.

One last feature that I found really cool and aesthetically pleasing was the silicone coating the outside of the Airgoo LED strips. It provides a barrier for dust, water and protection from other elements. In addition, it gives a slight diffusion to the light emitted.

Initially, I had decided to mount the Airgoo DreamColor LED strip under my computer desk to enhance my gaming setup. But, shortly after I decided on adding them to the underside of my bed frame. This gave a “glowing” effect to my bed and added enhanced lighting to my room.

Setting up the Airgoo LED strip was simple, easy and quick. It took me about 30 minutes to undo the 3M adhesive stripping on the backside of the LEDs. They adhered to the metal bed frame with no issue and I was able to route them the entire perimeter of the frame perfectly.

I also had no issue finding power for the RGB strip. Because of the long cables it was easy to route the power cord and get the Airgoo lights plugged in. As soon as they were plugged in, they powered right up and started glowing on the default “rainbow” mode.

Airgoo’s build quality on their DreamColor LED strip is exceptional, especially for their price. As mentioned previously, the Airgoo LED strip is coated with high-quality silicone that protects the individual LEDs from debris and contaminants. Compared to other LED products I have used in the past that are hard to bend, and will start to fall apart after manipulating them, the Airgoo LED strip does not.

The 3M adhesive used is as most 3M products are, of great quality. It sticks and adheres well to surfaces and, in my testing, was not easily ripped off. But, when it was taken off, it did not leave any residue on the surfaces.

The Airgoo DreamColor LED strip can be used for several applications. The most effect are for backlighting, accent lighting, generalized under glow, or diffusion lighting. They can even be used for outdoor lighting due to the IP65 rating and waterproofing.

The Airgoo DreamColor LED RGB Strip Review is functional, professional and good looking. The Airgoo LED RGB strip kit is capable for many applications, both personal and professional. It will fit the needs of most people.

In my opinion, I think that these are a phenomenal choice for LED lighting strips and if interested, you should definitely check them out!